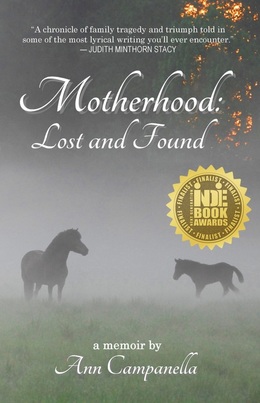 ﻿﻿Ann Campanella, a freelance writer and horsewoman, returns to North Carolina after a several year absence. In her mid thirties and ready to start a family, she is used to setting goals and accomplishing them. But when Ann experiences a series of miscarriages at the same time her mother shows signs of Alzheimer’s, she plunges into an emotional journey that leads her to a deeper understanding of herself and what it means to love.


Advance Praise for Motherhood: Lost and Found by Ann Campanella

Ann Campanella’s Motherhood: Lost and Found is a story that shines with love and growth -- a chronicle of family tragedy and triumph told in some of the most truly lyrical writing you’ll ever encounter. She writes of grief and loss with heart wrenching honesty but without sentimentality then adds humor in such unexpected places I found myself laughing and crying all on the same page. This is the best memoir I’ve read in years and I’m putting it on the shelf of books I’ll never lend.

- Judith Minthorn Stacy, Winner of the Carolina Novel Award and author of Maggie Sweet and Betty Sweet Tells All.

When I finished Ann Campanella’s remarkable memoir, Motherhood: Lost and Found, I tried to put my finger on what it was that had gripped me so in the reading of it. Was it the extraordinary dignity that she gave to her mother and father (whose age I am approaching) in the telling of the story? Yes, it was that, but it was something more -- what I would like to call the author’s ability to tell the story without getting in the way of it, without putting herself as character in an obtrusive position. What the book is finally about is not Ann and her mother, but family -- the love of a family -- Rose, Will, Nate and Ann and their parents, and how that love sustained them during a long and painful crisis, and how Ann’s relationship with her husband Joel was deepened and enriched by that crisis, and how three generations are better than two. It is a ruthlessly honest book about pain and suffering, but ultimately it is a redemptive book in which we are left with a final image of symbiotic love. Motherhood: Lost and Found has much to teach us all as human beings.

A sensitive, in-depth study of one woman’s slow descent into Alzheimer’s as detailed by her daughter, Motherhood: Lost and Found involves us in the dynamic of a multi-generational family as well as the author’s own story: horses, poetry, three terrible miscarriages, and in her 41st year, a final miracle.

Ann Campanella’s Motherhood: Lost and Found records the ordinary and extraordinary courage of those who must endure debilitating, even crushing illness and those who must suffer with them while they do so. Here is bravery, patience, reconciliation, and -- at long last -- hope. I found this story valuable in an intensely personal way. I think others readers will find it so too.

- Fred Chappell, former Poet Laureate of North Carolina
Get the first chapter free
Where to buy Motherhood: Lost and Found

Books can be purchased at:

Most bookstore chains can order this memoir.

Or find the nearest Independent Bookstore.